DAMN!  We hafta call it…

We’ve been trying to begin another season of music at “The Hill”! But here we go again! The radar and the satellite imagery wass telling us that it would start raining in Central Park around 1:30 or 2:00.  but at 1:00 the sky opened up. So we’re gonna hafta hang out with each other right here on your computer or device today… again! 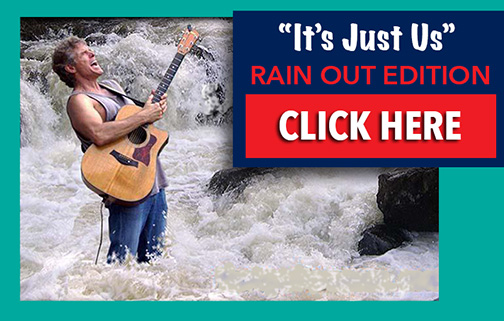 Hey listen! For those of you across the country and around the world… we’re still hangin’ out LIVE twice a week. On days like today when we get rained out of Central Park, we’ll stream LIVE from my studio in The Heights. And we’ll definitely keep it going at “It’s Just Us” on Wednesdays at 4:00. JOIN US!

Even though our entire season in Central Park was canceled in 2020 and shortened in ’21…  we’re making some new and exciting things happen in 2022.

I’m still living this Life with open arms and Love, but ZERO tolerance for people who voted for or continue to support the abomination that is TRUMPISM. As my song says, “I hope they feel like joining us someday.” But until that day, the rest of us have work to do!!!